Have Underwater Camera. Will Photograph Fish. 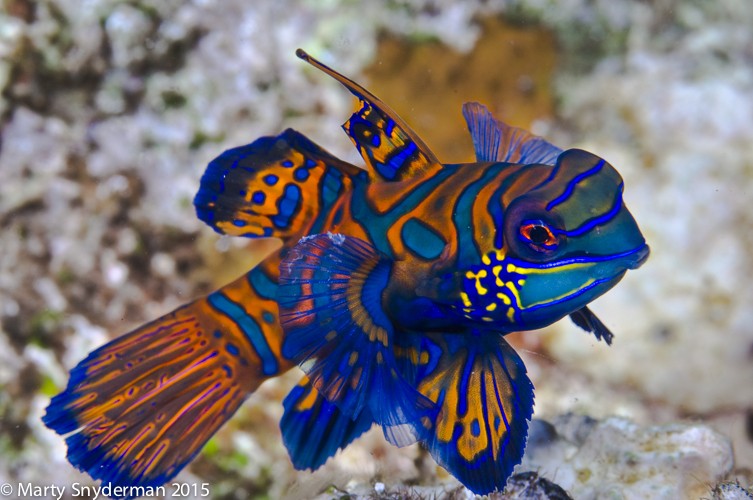 “Have underwater camera. Will photograph fish”.

I think this mantra applies to just about every underwater photographer in the world. After all, colorful fishes are one of the underwater world’s feature attractions, and for photographers many species are simply irresistible. But despite all of the things that fishes have going for them- color, beauty, eye-catching antics and fascinating behaviors etc.- it is still possible to take rather boring photographs of even some of the more handsome fishes.

Consider these two shots of flame angelfish as examples. With all of that bright orangeish-red and its handsome pattern, this fish just screams “take my picture”. But even this cute little jewel needs to be photographed in a pleasing pose. 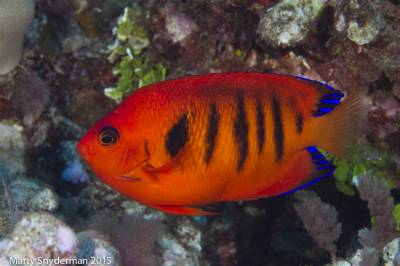 Boring! At least, this shot is boring when compared to the next image with the same species photographed in a pose that appears more animated and esthetically pleasing. 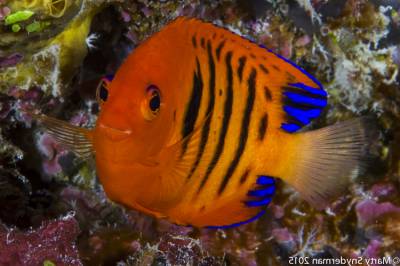 A much more pleasing composition of a flame angelfish.

Realizing that even great looking fished still need to be shot well, years ago I created five categories of fish photographs for my personal use. My idea was to help me get started knowing what kind of shot I want to create when I see a fish I want to photograph. Those categories are (1) an identification shot, (2) a fish in an animated pose, (3) a fish on its natural environment, (4) a behavioral shot, and (5) a dramatic shot. While I enjoy creating images that fit all of these categories, I am a sucker for behavioral images. A lot of underwater photographers are. Images that capture behavior share insight into the animal world, and I think a lot of viewers enjoy learning about the oceans through photographs.

Fishes behave in many ways including courtship, mating, predation, cleaning and camouflage etc., so when it comes to behavior you have a number of options. One of my favorite types of behavioral shots involves the displays of a variety of small male fishes. Males usually display for one of two reasons, to (1) ward off other males in kind of a “chest beating” display and (2) attract females as potential mates. The display by males of a given species looks the same in both cases as displaying males often flare their pectoral fins, erect their dorsal fins or spines, open their mouths wide in some instances, and try to make themselves look big. Big can be intimidating to other males and attractive to females that want their offspring to survive.

Consider the following shots to see why a photograph of a displaying male can be so much more interesting than “just another fish picture”. Here are three examples of an average shot of a male as seen on the your left, and a displaying male of the same species as seen on your right. I think you’ll agree there is a real “wow factor” in the shots of the displaying males. 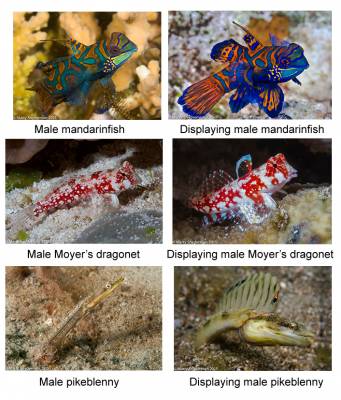 (Cliick image above to enlarge)

Of course capturing a shot of a displaying male takes a bit of knowledge, patience, persistence and some luck. I hope you will give it a try. After all, it is the reward of capturing a challenging shot that makes underwater photography so much fun!

Marty Snyderman For the Vivid-Pix Gang

We hope that you’ve learned how to Take Better Pictures.

Tweet
One Strobe Or Two? What’s Right For You, And Why
One-Click Editing with Vivid-Pix - We test the edi...

One of approximately 75 people inducted into DEMA’s Scuba Diving Hall Of Fame, Marty Snyderman is a proud recipient of DEMA’s 2008 Reaching Out Award. Marty is an EMMY Award winning cinematographer, still photographer, author and speaker specializing in the marine environment. the Marine Life Editor of Dive Training magazine, Marty produces at least three columns a month in every issue, including the underwater photography column entitled "Behind The Lens" and a natural history column entitled "What’s That".

Randy Fredlund
31 March 2021
As always, the better the scan, the better RESTORE is able to help.
Vivid-Pix News & Events
Randy Fredlund Tech Talk
Tips & Tricks - Learn how to do more and save time.
223 Hits
Read More